Jamie volunteers in KidsZone at New Life with his wife Rachel. They have been married for 14 years (it will be 15 on December 30). They have two daughters, Maris and Riley. He has been at New Life for 4 years.  Today Jamie celebrates his birthday!

2. What does your family think of you being on a mission trip?
They first found out while we were in the Dominican Republic when we were having lunch with a Haitian. Rachel accidentally let it slip that I was going on a mission trip to Haiti in front of the kids. The kids were upset that I was going to be gone on my birthday. Maris tried to guilt me about it for a while. So here is the cool part. They have been talking about doing a lemonade stand for about a year. We promised them they could do one when Rachel’s sister came to visit, which ended up being this week. So they did a lemonade stand and raised $80.25 for my trip.

3. Who is your favorite baseball player of all time? And do either of your daughters have his jersey?
Growing up my favorite player was Jonny Bench. And yes, Riley now wears it.

5. What was the most reckless thing you ever did under the age of 18?
In Indiana there was not a lot going on. So we used to go out to the cornfield, steal corn and then drive down the highway chucking them at street signs.

6. What is your favorite game show of all time?
I really like Sale of the Century. It was a cheap rip off of the Price Is Right. 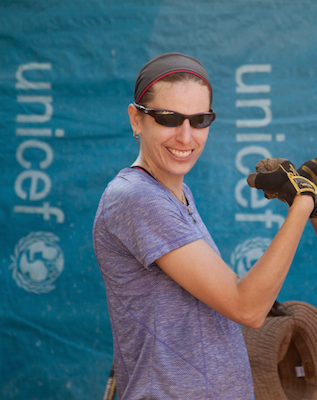 Meghan is an emergency veterinarian doctor. She was recently water baptized with her good friend and co-worker Amber who is also on this trip. She has been at New Life for 3 years. We are sad to lose her as she is moving to San Diego for a new job.

1. What was your favorite extra curricular activity growing up?
As a kid growing up in Massachusetts, I enjoyed going biking in the woods and playing in the cranberry bogs in the offseason. Unfortunately we never saw the Ocean Spray guys doing commercials.

2. What is the coolest thing you have ever done on a vacation?
While I was on a conservation trip in Australia we got to explore in the rainforest.

3. What are the many different places have you lived?
Connecticut, Massachusetts, California, Hawaii, Michigan and then back to Connecticut. And soon I’m going back to California.

4. If you had two tickets to go see any musician or band in concert who would it be?
It is hard to pick. I am an eclectic music person. But if I had to decide, it would be Bon Jovi. I grew up with him and I still think he is awesome.

5. As a vet, what is the coolest animal fact that you know?
That if you put a porcupine in water, they will float because their quills are hollow.

6. What is the most unusual food you have acquired a taste for?
When I was younger we ate fried chicken hearts. Now that I am a vegetarian it would be fake ribs.