“The Lord will guide you always; He will satisfy your needs in a sun-scored land and will strengthen your frame. You will be like a well-watered garden, like a spring whose waters never fail. Your people will rebuild the ancient ruins and will raise up the age-old foundations; you will be called Repairer of Broken Walls, Restorer of Streets with Dwellings.” Isaiah 58:11-12 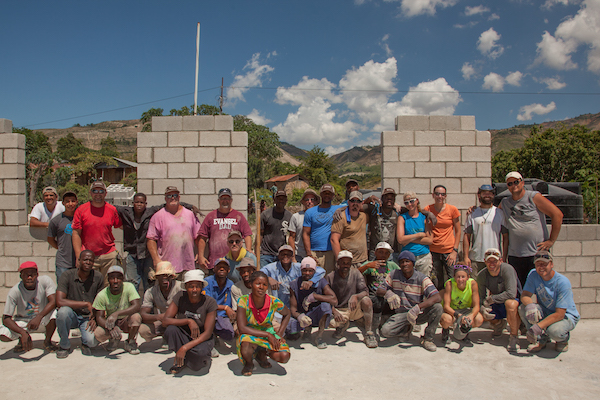 Today was our last workday at the church. This morning we thanked God for one last opportunity to invest in our adopted community. We went to bed last night facing the possibility of political marches and riots along our route.

But by the works of God, it was the same cattle car. Same ride up the mountains. Same beautiful scenery. It was a replay of every other day and that was a great thing!

Our attitude this morning? “Let the games begin!” We have proved to be grizzled (some more than others) veterans of the block laying frenzy. 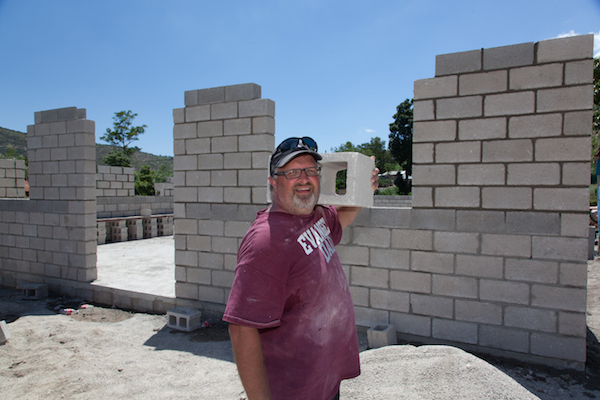 It has been a sun-scorched land and He has strengthened not just our own physical frames…  But the Lord has also strengthened every single part of the church we have built so far. Yes the physical building. But also the outreach into the houses around the church. Something as simple as a can of baby formula has brought relief and comfort to an entire family with a tangible need.

It was another day of laying cinderblock along the exterior walls. Team Haiti manned the cement mixer. And even though we agreed that we were going to be a unified Block & Mortar United team, there was a bit of a secret rallying of “Team A Few Old Guys”. They even went as far as stealing hand trowels and hiding the water.

“Team Gil” caught on pretty quickly. They didn’t stoop down to their level but instead played the high road. With each member of Team Gil doing their job perfectly and efficiently, they laid three times as many blocks as those Old Guys…. Again. 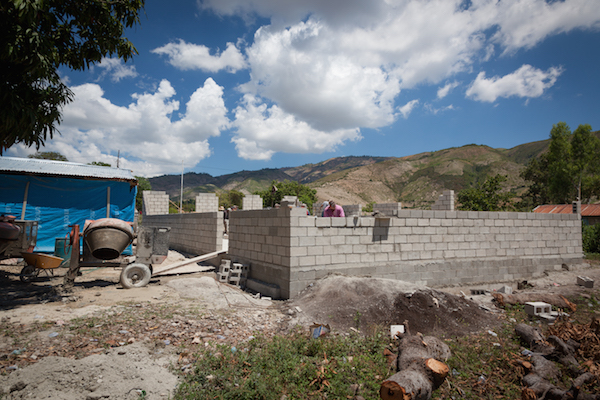 After lunch we got back to our hustle. Richard gave us a bit of a break when he brought a donkey onto the concrete floor. Leading him straight to Pastor Andy, Richard told him to hop on. Unwilling at first, PA just laughed. But everyone on the site yelled out some encouragement. Climbing up on a cinderblock to mount the donkey, PA nervously hopped on the back.

The donkey stumbled a little at first but was able to regain his footing. PA held on tight, fearing he would get thrown off. After quickly hopping off he said, “I don’t know whose back hurts more now, mine or the donkeys.”

Hoping that the donkey wasn’t too angry about his last ride, Manya then hopped on the donkey, showing PA how it really should be done. She steered him with ease throughout the cinderblock piles on the concrete floor. Zach took his turn and faired better than PA… It was a fun break and a sight we all won’t soon forget. 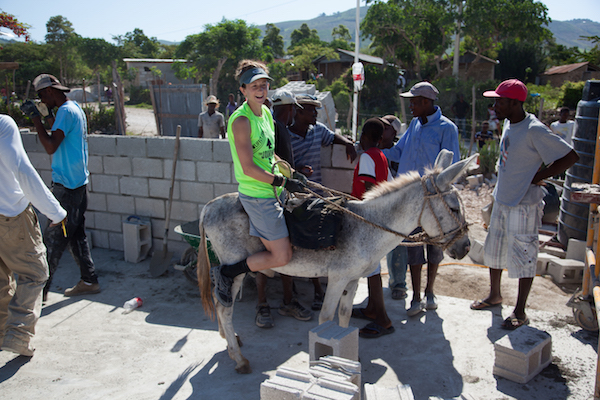 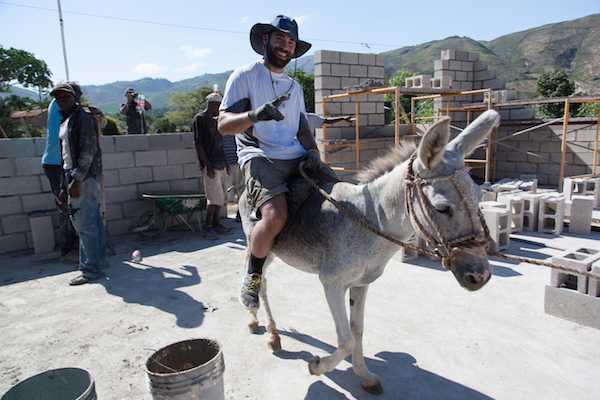 After that, it was back to work after having some fun. But we realized the heat was getting to our heads when we started calling the cinderblocks “cake” and the wet cement mixture “frosting.” It was either cake with frosting or cake without frosting. Thankfully it was time to start cleaning up.

We all gathered underneath the trees next to the church for one last time. It was time to say goodbye. Check that… we said see you later to Team Haiti. As we intend to see them again soon. We had an exchange of translated thank yous and God blesses. In French, the saying, “I miss you,” is “Tu me manques,” which means, “You are missing from me.” Team Haiti will definitely be missing from us.

Team Haiti foreman, Stefan closed in prayer in Creole, sending goose bumps down our arms as he continued to thank Christ for all He has done! They were all so grateful for what God had done this week.

Over the past four workdays, with the help of God, we accomplished something awesome. We laid the whole concrete slab, moved over 1,100 5-gallon buckets of material and laid 1,300 cinderblocks.

Tomorrow is a day off to go off into the surrounding area to check out the local villages. We look forward to a day of rest, exploration and reflection on the week. Please continue to pray for us as we close out the rest of our mission trip.

Sidenote: When you are a pastor you get what you want. Last night we were told that breakfast was going to be biscuits and scrambled eggs. Pastor Andy chimed in, “What?! No bacon?!” So guess what was included in breakfast this morning. Not just one tray of bacon. But two!