I will give thanks to You, O Lord my God, with all my heart, And will glorify Your name forever. Psalm 86:12 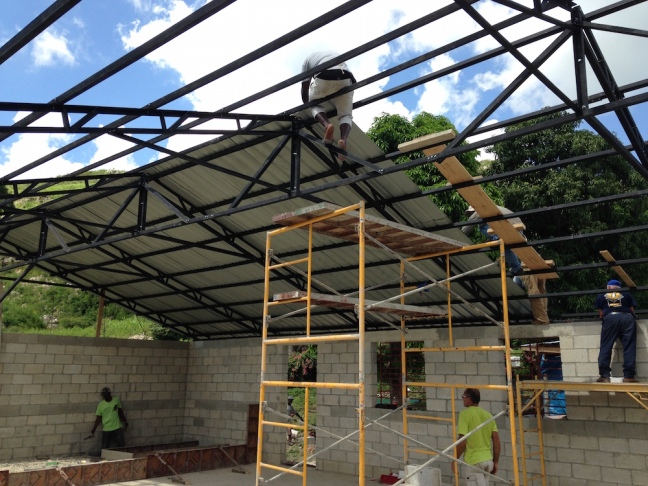 We know that you are all anxiously awaiting to see who the Patio Queen was for Day 4. Wearing a smile as big as Sydney, Australia it was…

Again. She refused to give up the tiara for another day.

Even though we got a 15 minute late start, we were rewarded with the most amazing sunrise on the mountain side. Good things come to those who wait… that is what we were going with anyway! The sky was a vivid wash of red, pink, blue and purple swaths. God went to town on his canvas this morning! We knew it was going to be a great day; a day God has given to us! It was time to do some good in Zoranje, workday number two.

Haiti had some rain last night, so the normal dusty trail was manageable as we climbed the windy path to the church work site. Thanks for that one God!

From the beginning Team Gravel was in top form moving another 240 (count them 240!) buckets of gravel to lay the base for the platform and steps near the baptismal.

With Pastor Jim as their personal lineman, Jerry, Todd and Stephan got back to work putting on more roofing. Can we get a “Raise The Roof?! What what?!”

Richard and Teagan laid the front block to fill in the gable, while Team Old Guys X2 (because they continue to get older…) finished up the windows.

The trench for the well water run off was almost completed, as Karin, Maureen, Donna, Dorothy and Alli were in sync from the get-go! So much was done, but we also had time for an amazing lunch from Evelyn and Bernadette (two of the ladies from the church). Really, really, really spicy chicken over rice with carrots, potatoes and onions. It was absolutely fantastic cooked on an open fire.

Prayer request alert!!! Please pray for healing for her little boy, as he has a fungus all over his scalp. Richard has been treating it for several days with some backwoods Kentucky remedy and it has started to clear it up! But we know that God can heal him instantly.

Workday three was complete. Corralling everyone into the cattle car, we prepared ourselves to battle the sea of humanity trying to get back to the guesthouse. The ride home today was longer than most.

Because it was market day. And you know what happens on market day?! You do not want to know what happens on market day. But we will tell you anyway. Everyone and anyone with something to sell buy or trade made their way to the city to deal their goods. And we mean everyone and anyone. Even the kid with the Santa hat. And the old man with the wool U.S. Postal cap. And you guessed it, the two guys trying to sell their big screen TV. People were everywhere just trying to scrape together a bit to get through until tomorrow.

We enjoyed another fantastic dinner and another night of sharing memories from our day with the incredible people of Zoranje. Thanks for that one God!

Stay tuned for more updates tomorrow. We plan on finishing the roof, laying the pipe for the drain, finishing the gable on the backside, and pouring the steps for the platform. There is much to do, but we cannot wait for you all to see it!

Continue to pray for us, Team Haiti and the people of Zoranje. Pray that this church we are building will continue to be a beacon for God’s light to these people.

And of course, the team victory for today… a dead, heat tie. Team Gravel matched the workload of Team Raise The Roof. They both deserve the award! The competition to win this award has gotten so intense, that everyone is maximizing their effort and performance! All done for the Kingdom!

Oh and Pastor Jim is really lobbying for Number 31 to win the national election!