The mystery hidden for ages and generations but now revealed to his saints.  To them God chose to make known how great among the Gentiles are the riches of the glory of this mystery, which is Christ in you, the hope of glory. Colossians 1:26-27 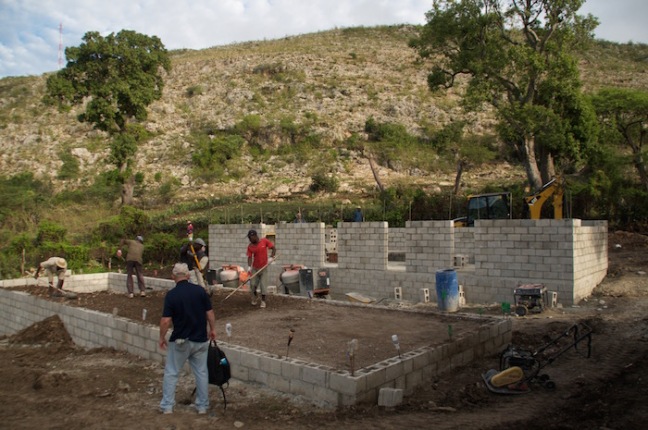 So you know that 10 pounds we already gained this week from eating the amazing Haitian food? Well add 10 more to that just from breakfast alone this morning. Three words. Biscuits and gravy. We might have had seconds (okay thirds), but come on we had to fuel up for the work day!

God was definitely showing off this morning, blessing us with the most vibrant sunrise we have seen in Haiti so far. The clouds funneled up out of the mountain, reflecting the sun, reminding us that today was a new day. Another day to walk with Him. Another day to share Him with others. Another day to trust in His plans. How amazing is that?

Today was market day. There are no words that can describe market day. But here we go. At 6 am the sidewalks were packed; lined with vendors selling anything and everything, from chickens to car floor mats to coal. There wasn’t an inch of space to be spared. The streets, crowded with automatic vehicles, manual vehicles (donkeys are the ride of choice) and pedestrians carrying bags stuffed with goods anywhere they can hold one.

At the entrance of the mountain heading to Zoranje, people filtered out, ready to sell their goods and make some money for the week to be able to provide food for their families. Women balanced large baskets on their head. We were so amazed that despite the “things” the people of Haiti don’t have, they are still the most joyful and nicest people on the planet.

As soon as we got to the worksite, we gathered into the church for our morning devo from Pastor Andy, which was very encouraging and probably hit the spot for all of us. He started off with a question, “Raise your hand. But don’t really… How many of you got frustrated yesterday? Last week? A year ago?” Um, hello, all of our hands should have been raised! 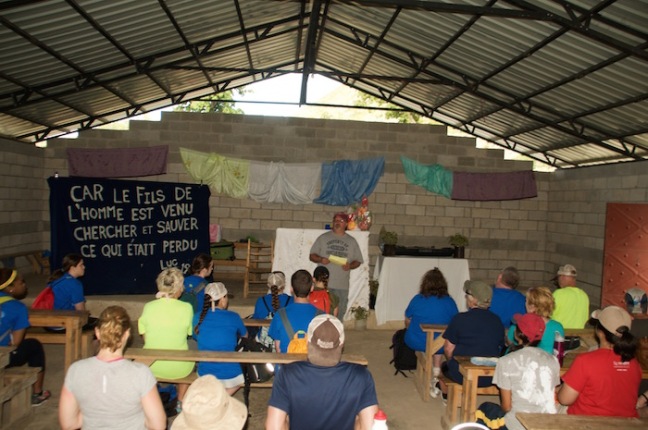 The reason for the frustration, he explained was because we were trying to make something happen that only God can make happen. We need to really on His strength, His grace and His power to complete whatever task He has called us.

He reminded us that God is the author and finisher of His plans and that we must rely on God instead of ourselves in order for things to work out. And the best part about that? Christ lives in all who believe in Him! And Christ being in us is the hope of glory.

“Team on three“ and we were so encouraged that we were ready to finish the school right then and there! We dispersed into our teams and got to work!

The VBS crew had another fun-filled day with the kids. In addition to jump rope, playing with parachutes, and braiding the girls’ hair in cornrows, they taught the kids about sin. 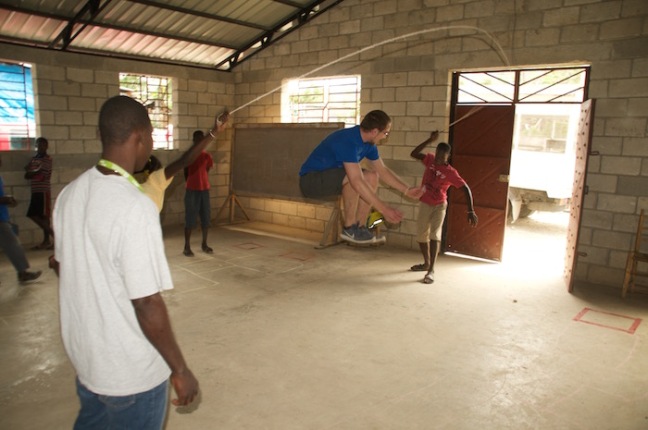 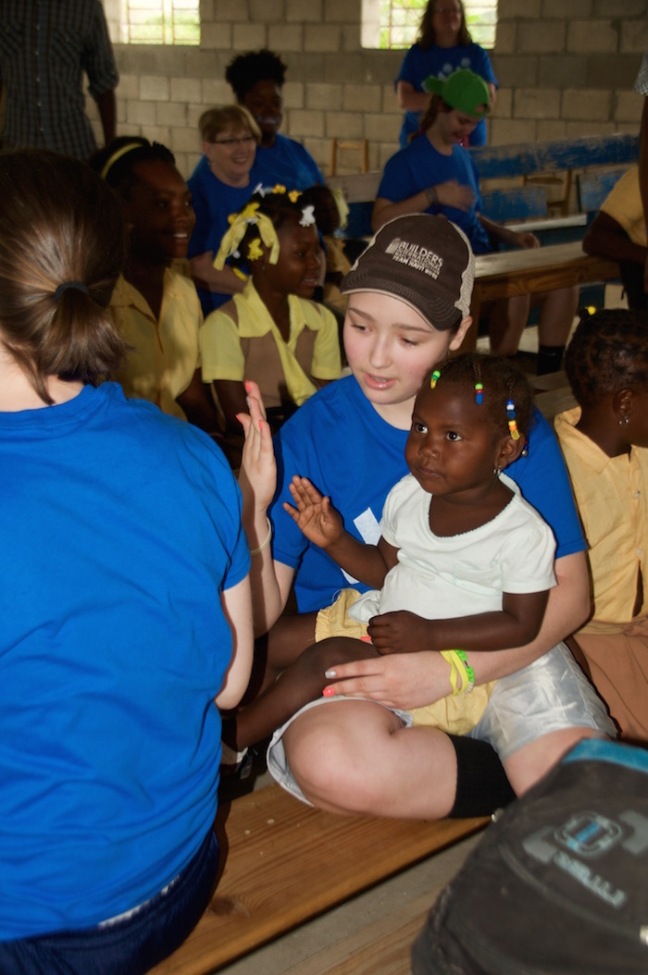 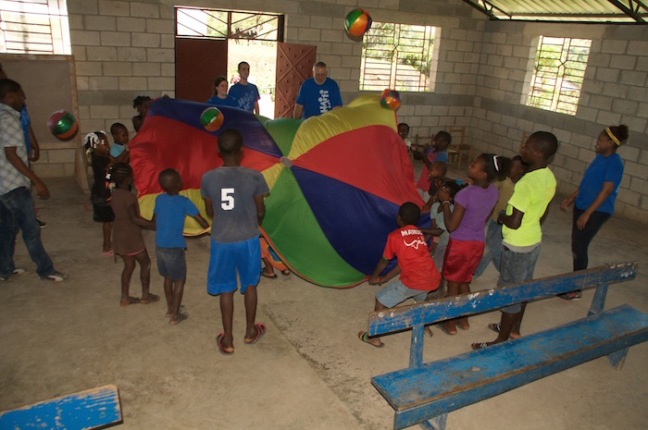 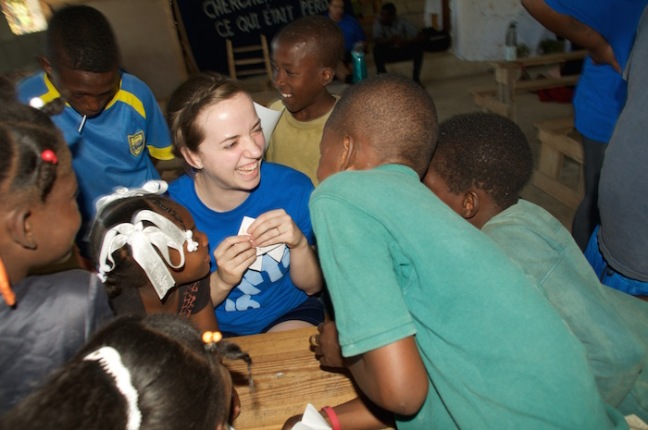 The message of the lesson was about how we have sins and that we are our sins. But most importantly that God can wash away our sins. We just have to pray and ask for forgiveness. John, our interpreter did such an amazing job relaying this message to the kids. He had some visual help from Yolanda who had dirty rags with different sins pinned to her.

The kids got a hands-on experience in how it works. A chair was set up in a square, which represented Jesus. All of the kids had a few rocks, which each represented a different sin. They had a relay race, where they had to take a “sin rock“ one at time to Jesus. 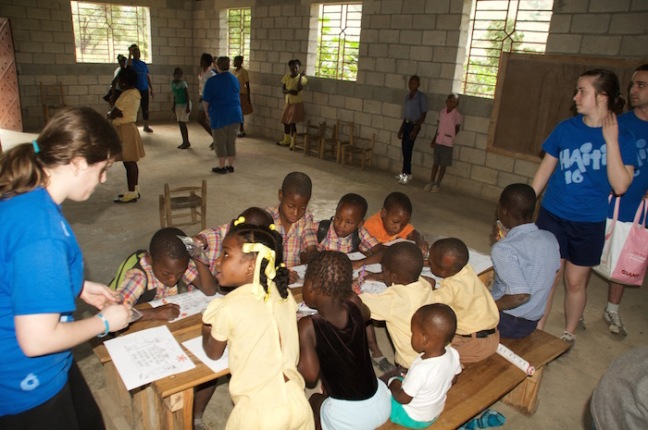 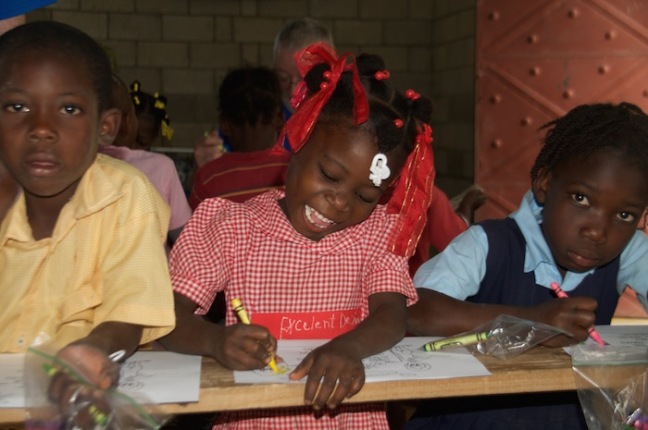 At the end of the day, John the translator brought a kid over to the group and asked him what he learned. The kid repeated the message perfectly. When asked what are a few sins, he explained, “Lying to your mom. Stealing and not respecting your parents. Adultery.”

Meanwhile, at the worksite we were building in another way. The walls kept growing, row-by-row. All the teams were high up on the scaffolding, cake laying, mug slinging and caking moving their way around each other. We were in sync, encouraging each other as the sun beat down on us. 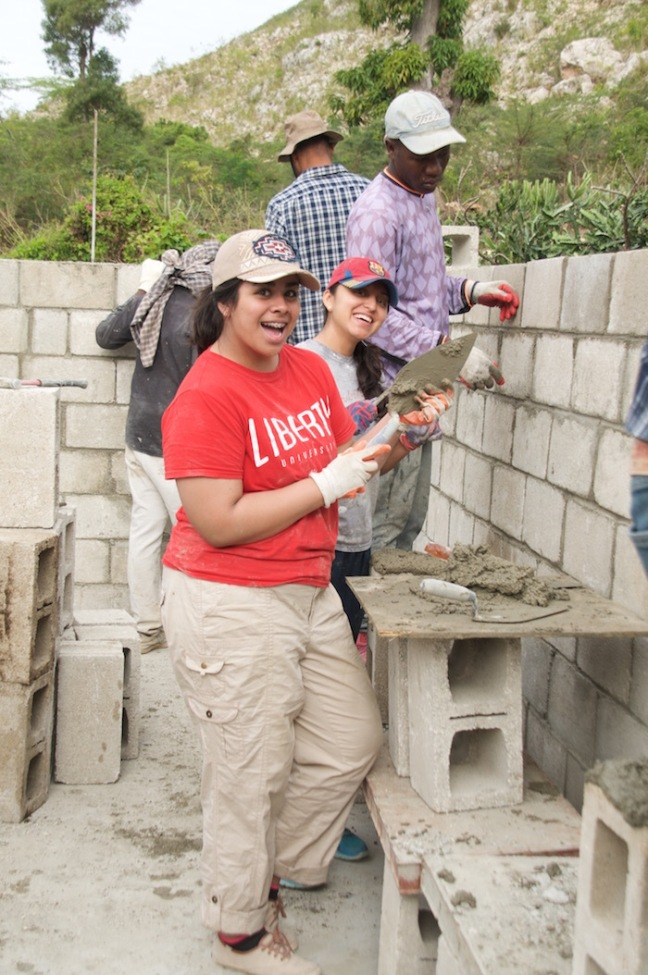 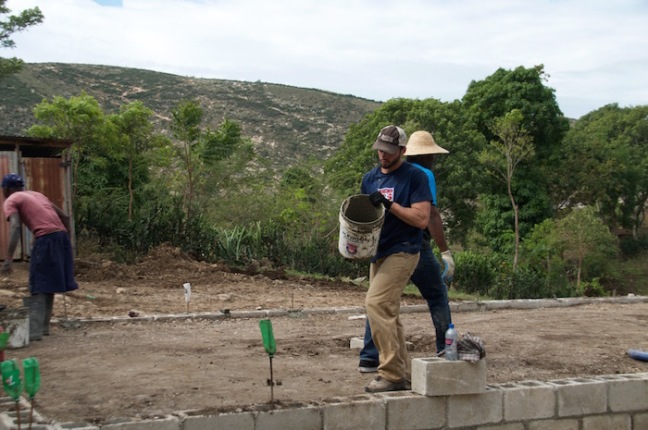 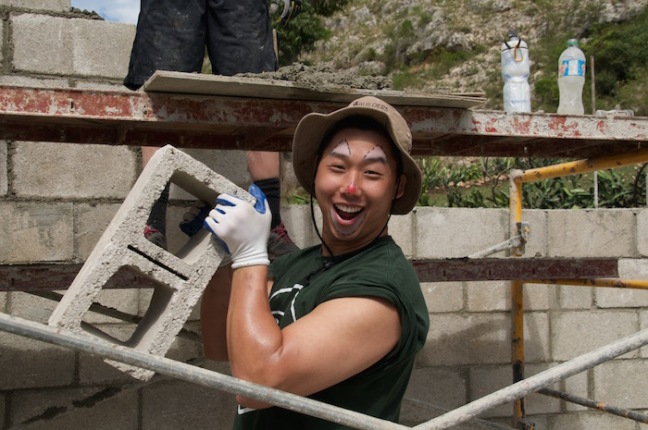 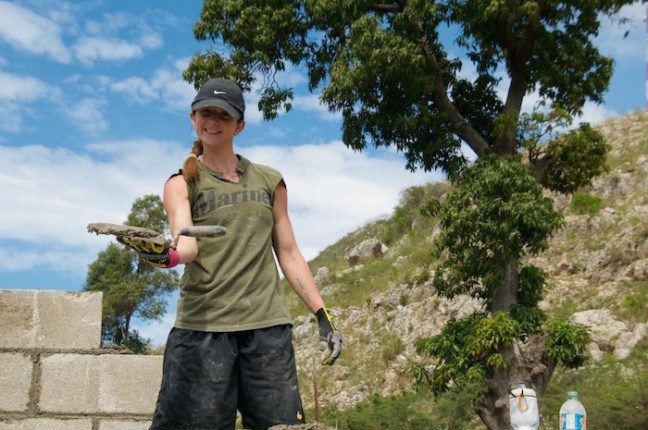 Team Gravel powered through another day, shoveling their way through piles and piles. The team A Bunch of Old Guys clearly brought home the championship today but out of technicality Team Gil was the first to finish their wall. Never mind the fact that he had a few four foot spaces without blocks, which will be used for windows… 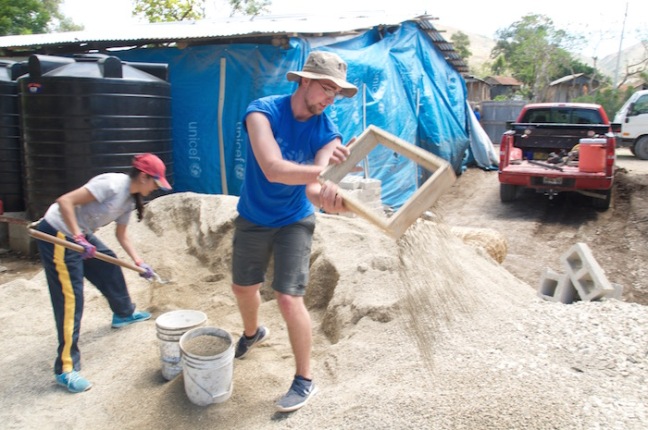 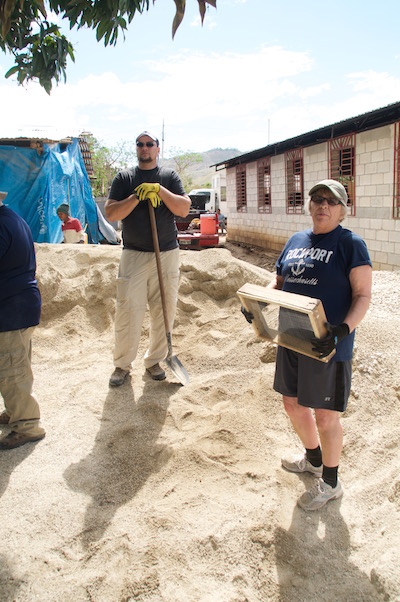 The Zoranje women made us lunch again today. Beans and rice, meat and veggies this good will never get old! 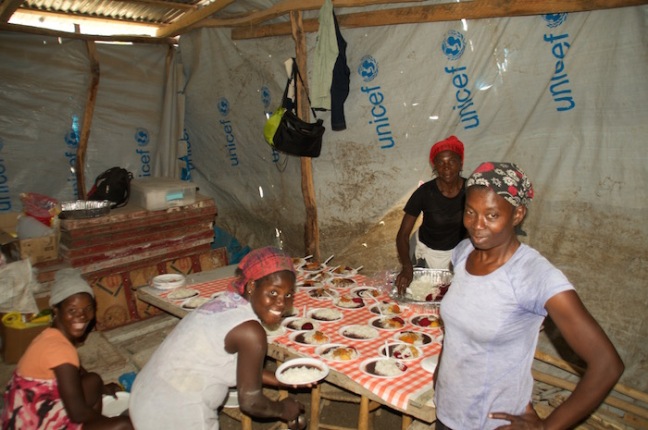 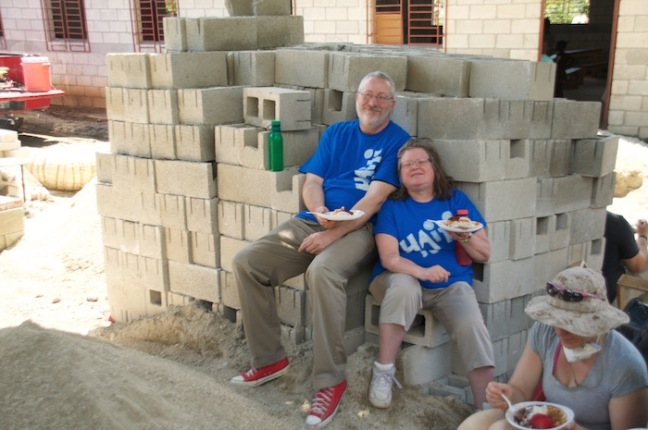 As the workday came to a close, A Bunch of Old Guys had one little block piece to put in. They went through numerous blocks, chiseling pieces down to fit perfectly, like the last piece of a puzzle. Finally they had to give up, as the saw had been put away. Frustrated? It wasn’t in God’s plan to finish that row.

The ride back to the guesthouse was the usual. Maxine, our driver found the shortcuts, weaving in and out of traffic to get us home. The cattle car was filled with laughs and stories from the day. It was a long, hot day and we were physically covered in sweat and concrete. But we were spiritually filled with God’s joy and love.

And of course our usual jokes! Sleeping selfies… Poor John the interpreter, fell asleep in the corner of the cattle car. Oh there is no mercy, even for the newbies. We filled our cameras with just a few selfies. 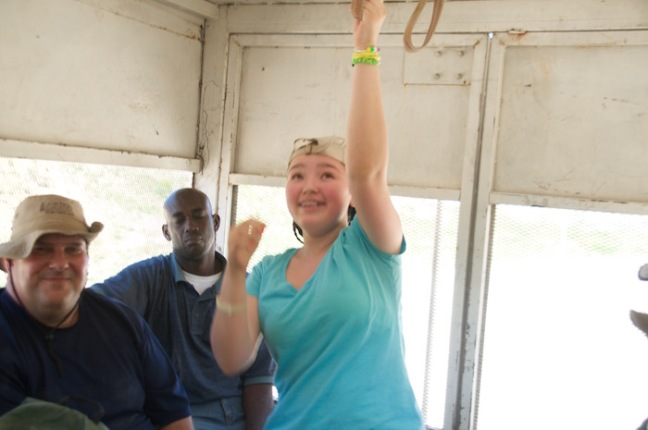 Back at the guesthouse, we were all over the place. It was like we did not just spend all day working hard in the heat. Some took the opportunity to get cleaned up, some checked out the vendors across the street selling their art, and others played basketball and soccer with the neighborhood kids in the driveway.

So here’s an amazing story to end our blog. Today, a young man who is a part of Team Haiti came up to Lorna (aka Tre Blanc according to Team Haiti, which means “Very White” We are not sure if they are referring to her hair or her skin. We think both). The man had some trouble with his family and he asked them to pray for him. He wanted Jesus to change his heart. He wanted to invite Jesus in.

Tomorrow we will continue to finish the walls of the school. That one, little piece. And then we will get to the roof. 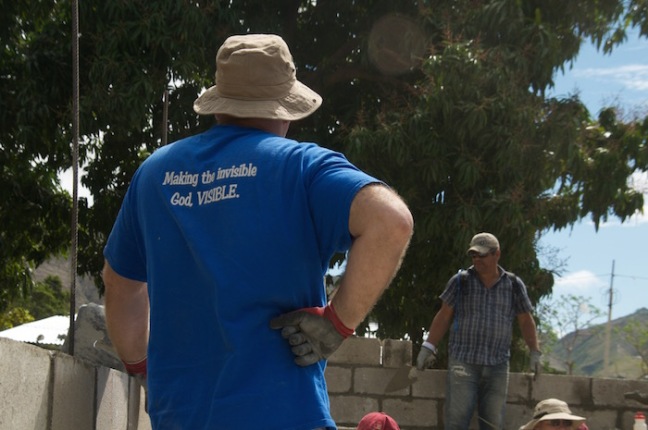